Today we have Lana Del Rey and her third EP, Paradise pressed on vinyl. There is also a pressing that is the Paradise (Born To Die) Edition that includes her second studio album in the package. This one is just the EP and was bought at Barnes And Noble for under 15 bucks. When this album came out in 2012 it sold nearly 70,000 copies in its first week reaching the number 10 spot on the Billboard charts. The song "Ride" was probably the most popular single off the EP and had a music video. Like half of this EP contains a music video for each song. Inside this vinyl sleeve you get a nice 180g black vinyl and a lyric sheet with Paradise on the front. Nothing too crazy really, but the vinyl sounds incredible and Lana Del Rey just sounds great on vinyl. Well lets take a look at this vinyl and then listen to a track from the EP. 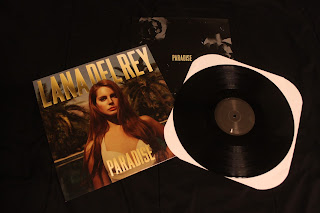 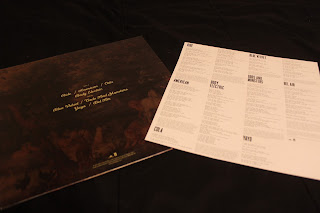 Posted by George Schweigart at 8:31 PM No comments:

Today we have a vinyl to share and that would be alternative metal rock band Three Days Grace's self titled debut album pressed in the metallic color variant. I picked this beauty up at a FYE right outside of Philadelphia. It is pressed in 150g of metallic colored vinyl and really does sound great. Normally I find that a lot of colored vinyl pressed is 140g and black vinyl is 180g. I find that without a slip mat the lighter records won't always play as good because they tend to skip or bounce grooves on the first song on each side of the record. Well lets get back to the album. In the sleeve you get the vinyl with a two sided lyric sheet that also is the inner sleeve for the vinyl. This is their first album and I bet a lot of you remember this album or at least most of the songs by heart and I will share one with you after we look at the vinyl and its packaging. These guys were just a trio at the time of this debut. Three Days Grace inked the deal with Jive Records before this album sending them a song from their demo tape titled "I Hate Everything About You". We all remember that track and if you don't....well go gain that knowledge. Jive Records was a label under RCA Records but unfortunately in 2011 they ceased operations, but Three Days Grace were moved to the RCA label itself and are still signed with them today. I imagine most of you know but if you didn't, the original lead vocalist, Adam Gontier left the band in 2013. He is now the front man of Saint Asonia, check them out too. He was replaced by the bassist's brother, Matt Walst from My Darkest Days. Well lets take a look at this album on vinyl and then listen to a goodie from the tracklist! 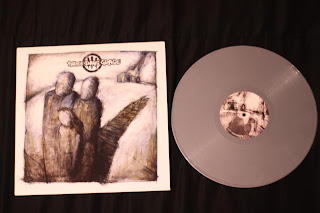 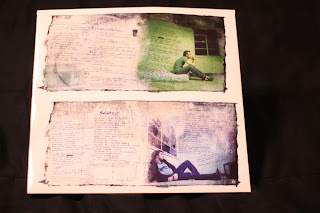 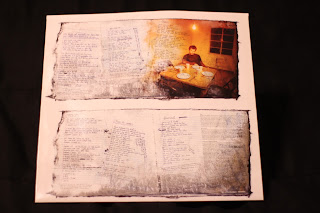 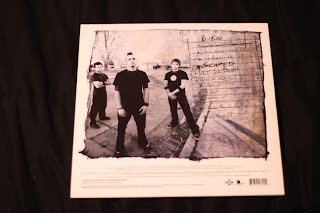 Hope you all enjoyed this vinyl today!

Posted by George Schweigart at 8:55 PM No comments:

Today we have a fairly new up and coming rock band and they go by Can't Swim from Keansburg, NJ. They formed in 2015 and literally got signed to Pure Noise Records before their first show in late 2015. A few months later these guys rolled out their debut EP, "Death Deserves A Name" through Pure Noise in February of 2016. So after some singles and an EP came an album this year, "Fail You Again" and it literally came out a couple days ago. It is available on Vinyl as well with some pretty color variants too! Cant Swim have sounds of aggression and calmness through their songs and they really sound great. Basically their whole new album is worth a listen and I will share a track from it along with an earlier release first. Lets take a listen! 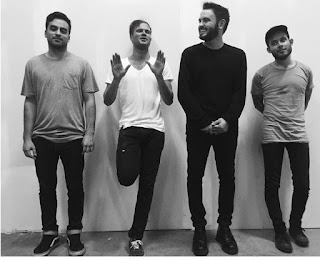 Posted by George Schweigart at 7:53 PM No comments:

Its Monday so that mean we look at another vinyl. Today the album on vinyl is Atreyu's sixth studio album, Long Live pressed in gorgeous red with black smoke or swirl. This pressing was exclusive to Hot Topic and I lucked out when I found this. Hot topic was discontinuing their vinyl in the stores and were selling this album for 5 dollars! I picked up a few albums at this Hot Topic in Pittsburgh, Pennsylvania. I am not sure how limited this pressing is but it can be bought online for under 15 bucks, Discogs usually has the deals and basically any vinyl you want. This album was released through Spinefarm Records and Search and Destroy Records on September 18, 2015. It charted high in many locations and categories such as a few of the Billboards charts. This vinyl comes in a gatefold sleeve with the beautiful vinyl, photos/lyrics sheet, and a download card of the full album. Well lets take a look and then we will listen to a track from the album! 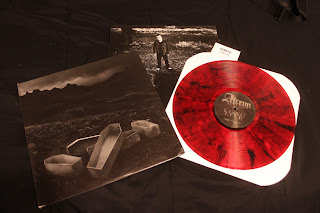 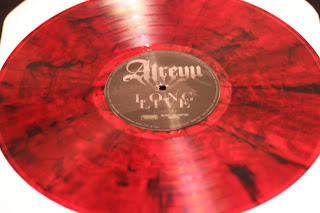 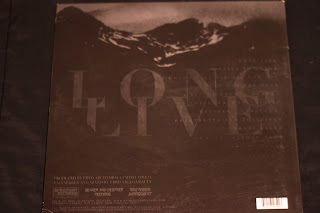 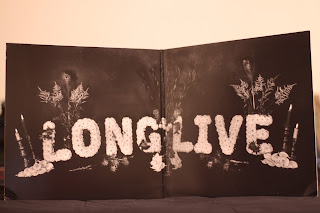 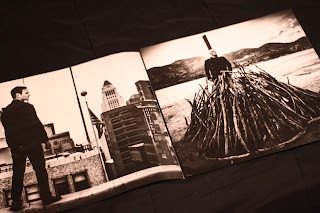 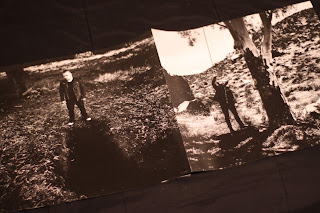 One from the album
Atreyu - A Bitter Broken Memory

Hope you all enjoyed this vinyl and Atreyu, check out more of Atreyu below.
Website
Facebook
Merch

Keep Your Day on Play!

Posted by George Schweigart at 8:02 PM No comments:

Today's band is an Indie Rock mixed with Electronica band and they go by The Gloomies and  have a little Punk to them as well. This band is only a few years old now with only some singles and a great EP titled "Blackout EP" released in 2016. This band comes out of San Diego, California and is signed with Thrill Me Records. This band is up and coming for sure and keep an eye out because they have new music on the way. I hope that you all enjoy the material they have released so far and who knows, maybe they are playing a show near you. Lets take a listen everyone! 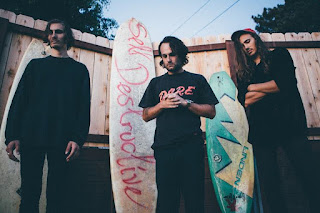 One from the Blackout EP
The Gloomies - Fire Escape

Posted by George Schweigart at 7:29 PM No comments:

THE USED "In Love And Death" Vinyl

Today on Vinyl we have a band a lot of you might know and they are The Used. The album is In Love And Death and it was originally released in 2004 through Reprise Records. This particular vinyl was released in 2016 through Reprise and Hopeless Records. It is a red, white, with black splatter single LP vinyl and is limited to 1000 copies through FYE. Inside the jacket you get a full album download card and nice two sided lyric art sheet. The Used have plenty of different colored vinyl variations for different albums to see. I will share a song from this album to listen too after we look at this vinyl and packaging. The Used have been a band since 2001 and still rock today. Hope you all enjoy! 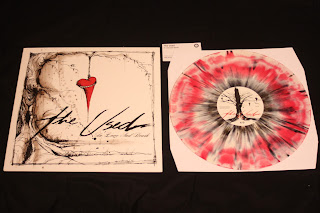 Here is side B 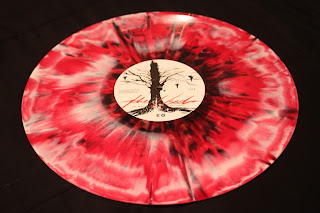 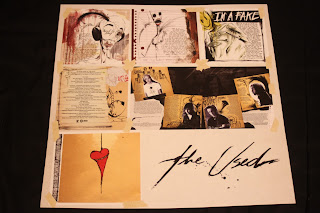 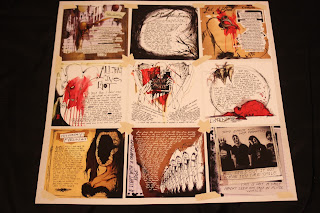 Even the back is nice! 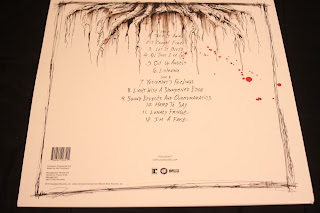 The Used - All That I've Got

visit The Used pages below
Website
Facebook
Merch
Also find them on Spotify and other streaming services.

Posted by George Schweigart at 7:17 PM No comments:

Today we have a Indie Rock, Pop, and Noise band, GRMLN. Originally started in 2010 as just a one project founded by Yoodoo Park. He is from California and was born in Kyoto, Japan. His debut EP, "Explore" was released in 2012. By 2013 GRMLN had became a band with a drummer and bassist to complete the lineup and then release a full length album titled "Empire" which had some punk pop vibes and all that good stuff. GRMLN's latest album is 2014's "Soon Away" with hopefully another one on the way soon. Their new single "Night Racer" came out in 2016 so keep on the lookout for new GRMLN. All albums released through these guys have been with indie label Carpark Records. Side note, these guys have vinyl of about all of their work!
Well lets take a listen to this band! 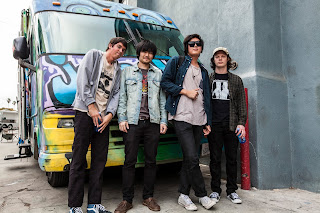 The new single! (such a beautiful sound)
GRMLN - Night Racer

GRMLN is a must listen and if you want to see more check these links below!
Facebook
Bandcamp
Merch (Vinyl too)

Posted by George Schweigart at 8:28 PM No comments: