Today we have The Orwells, an indie rock band from Elmhurst, Illinois. The members of the band formed while in high school a little more than 6 years ago with the last member graduating high school in 2013. So yes, this is a young band, but since their beginning they have signed on with labels such as Atlantic Records, Autumn Tone Records, Canvasback Music, And National Anthem Records. A hard charging indie band for sure that needs listened too. So far with 2 official albums, and a few EPs these guys have plenty of music to choose from. On February, 17, 2017 these guys will release a third album titled, "Terrible Human Beings" through Canvasback Music. And for the vinyl lovers, basically all of their work has been pressed and for the most part, easy to get. Here are The Orwells! 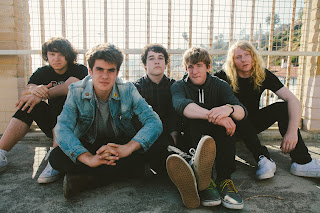 From their 2014 album, "Disgraceland"
The Orwells - Who Needs You

And from their 2012 debut album, "Remember When"
The Orwells - Mallrats (La La La)


Posted by George Schweigart at 8:47 PM